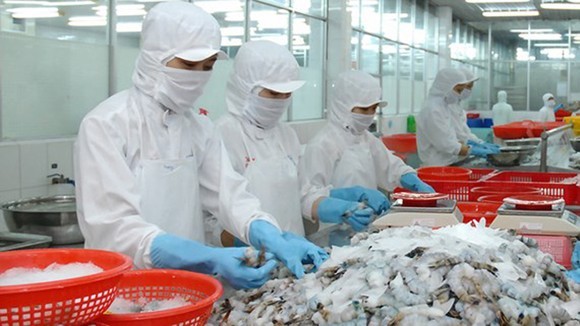 Frozen shrimp production at a factory in the Mekong Delta province of Hau Giang. (Photo: SGGP)
The country earned more than $3.2 billion from aquatic exports in the second quarter of 2022, an increase of 36 percent from the same period last year.

According to VASEP, shipments of shrimp picked up 7 percent – a quite modest pace – to total $450 million as a result of input shortages. Though, the sector experienced a strong growth of 33 percent in H1 to bring home $2.3 billion, accounting for 40 percent of the total seafood exports.

Several producers have raised the shipments of high value-added processed shrimp products, instead of raw ones, to major markets like Japan, the US and the EU as a way to address input shortages.

High inflation coupled with the Russia-Ukraine crisis have brought big opportunity for Tra fish from Vietnam this year. Sanctions on imports of Russian-caught whitefish in response to its conflict with Ukraine have caused severe shortages on the global market, especially the EU, the US and the UK, whose imports mainly sourced from Russia, according to Le Hang, Director of the VASEP Training and Trade Promotion Centre (VASEP Pro).

Many restaurants in these countries have had to exclude whitefish, like cod, from their menus and seek for alternatives. Thanks to that, Vietnamese Tra fish had opportunities to gain a larger market share after months of struggle, Hang said.

In June, Vietnam exported close to $220 million worth of Tra fish, up 54 percent year-on-year. The figure soared 83 percent in H1 to hit $1.4 billion, representing one-fourth of the total exports. Shipments to the UK enjoyed an exaggerate six-fold rise from the same period last year, followed by Spain (three-fold increase).

The tuna sector earned some $553 million in export turnover during the period, up 56 percent year-on-year. The US remained Vietnam’s largest buyer of tuna that imported over half of the Vietnamese shipments.

VASEP anticipated that aquatic exports will be likely to reach $10 billion this year, up about 12 percent from 2021.