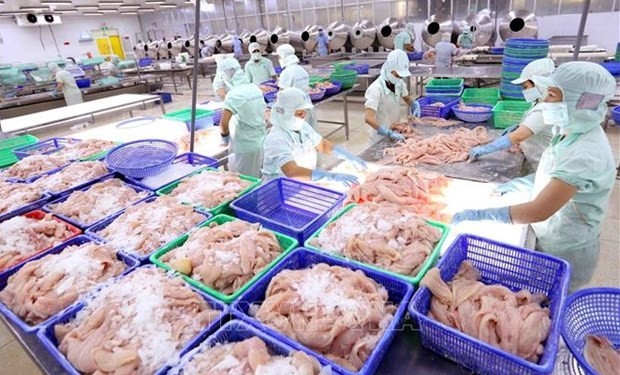 The exports of aquatic products are expected to fetch US$2.8-3 billion in the second quarter, a year-on-year increase of 36-38 percent, thanks to the strong growth of key products. (Photo: VNA)
The aquatic export value in March exceeded US$1 billion for the first time. In April, it continued to grow, obtaining US$1.13 billion, raising the four-month value to more than US$3.6 billion, a year-on-year increase of 46.8 percent.
Aquatic exports in the second quarter are forecast to continue enjoying impressive growth as a bright future is predicted for key products.
Vietnam exported US$406 million worth of shrimp in April, up 35 percent compared to the same period last year, bringing the four-month export turnover to US$1.36 billion, a year-on-year rise of 41.5 percent.
Strong growth was recorded in tra fish shipments to some markets in the period, such as China with 161 percent, the US 128 percent, and Canada 69 percent.
The increasing demand for Vietnam's key aquatic products post Covid-19 in large consumer markets including the US and China, rising prices and supply shortages due to the impact of the Russia-Ukraine conflict are offering an opportunity for export firms.

According to VASEP, the US and China will continue to be the main markets for aquatic exports in the following months.
A decline in pangasius production in the US, final results of the 17th period of review (POR17) regarding Vietnam’s tra and basa exports to the US, and more Vietnamese businesses permitted to export tra fish to the US are creating favorable conditions for Vietnam to ship tra fish to this market.
Meanwhile, shipments to China also bounced back after months of decline due to China’s “Zero-Covid” policy. Vietnam exported US$578 million worth of aquatic products to China from January to April, up nearly two-fold compared to the same period last year.