The Ministry of Agriculture and Rural Development said on July 17 that in the first months of this year, production of fruits was fairly smooth thanks to good prices, especially key fruit trees, including dragon fruit, mango, rambutan, longan and durian, have brought high efficiency.

As a result, farmers have continuously expanded the area of Thai jackfruits. Statistics in 2018 showed that the area of jackfruit trees across the country was around 26,174 hectares with productivity of 16.5 tons per hectare and production of 307,534 tons. Of which, Mekong Delta provinces had the largest area of jackfruit trees with 10,105 hectares. In the first half of this year, farmers in provinces in the Mekong Delta have continued to newly grow 1,141 hectares of Thai jackfruit trees.

Although Thai jackfruits give high profits, jackfruit has not been considered as a key fruit tree so there has not been any investment or support for its production yet because jackfruit trees have been grown spontaneously by farmers without specific cultivation process. 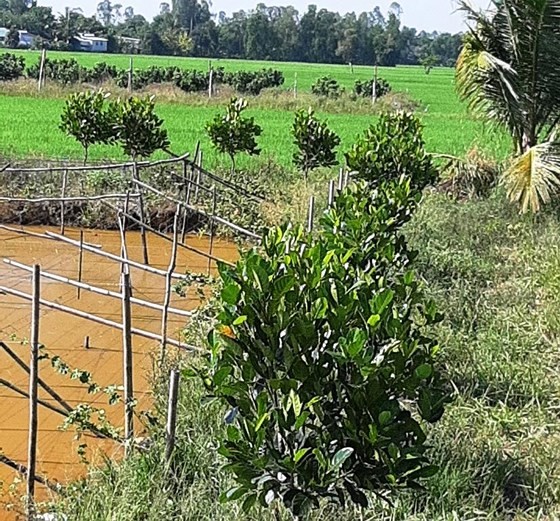 Farmers expand the area of jackfruit trees massively in Mekong Delta provinces. (Photo: SGGP)
Survey by the Department of Crop Production showed that the switching to grow jackfruit was scattered in many provinces instead of concentrating in one place with large area, leading to many risks in flooding season as the dyke system has not been completely built.

Meanwhile, pests and diseases occurs complicatedly. The demand for seedlings is high while supply for healthy seedlings and control on seedling quality still face many difficulties. Especially, consumption of Thai jackfruits mainly relies on China so it is risky when market changes.

The price of jackfruits usually changes wildly. Sometimes the price is extremely high but it also drops drastically to a few thousands Vietnamese dong per kilogram.

According to Mr. Tran Hong Duc, deputy head of the Department of Agriculture and Rural Development of Chau Thanh District in Hau Giang Province, local farmers have newly grown around 500 hectares of Thai jackfruit trees, increasing the area of jackfruit trees in the district to nearly 3,000 hectares, the highest level in the province. At the present, traders buy first grade Thai jackfruits at about VND30,000 per kilogram and second grade ones at VND15,000 per kilogram. However, the price is unstable as it depends on export situation to China. Therefore, authorities warned that farmers should not rush to expand the area of jackfruit trees rapidly.