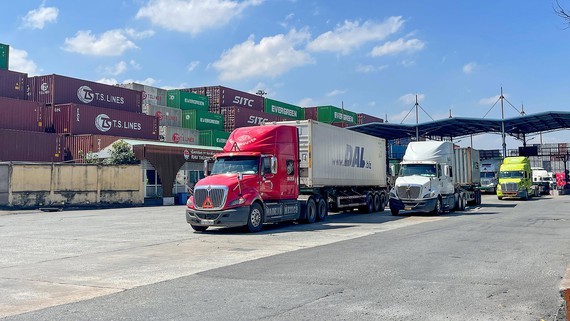 Trucks arrive at Cat Lai port (Photo: SGGP)
Director of the USAID-funded Trade Facilitation Project Claudio Dordi revealed that according to a survey of the current state of Cat Lai port operations conducted by USAID, four main difficulties have been threatening the stability and port performance including traffic congestion around the port, overload of administrative procedures, incomplete information technology infrastructure. Additionally, he said the city’s canal system is not capable of receiving a container ship capacity of over 3,000 TEUs.
Many businesses also said that the clearance time at Cat Lai port has improved, but compared to other ports in the region, it takes 6.37 days to clear the shipment. As international trade recovers from the impacts of Covid-19, addressing congestion at Cat Lai Port has become a priority. However, this is difficult to improve because the volume of containers passing through Cat Lai port is about 6 million TEU (in 20-foot containers) each year, but only 200 customs officers are responsible for handling the work at the port. Worse, customs officers must handle 500,000 declarations a year.
In recent years, the information technology system has been applied to the fullest extent, but because it has not been synchronous, two customs clearance systems including online and paper are being used in parallel making it difficult for businesses and customs officers.
Moreover, the specialized inspection by ministries and sectors has not been improved, which also prolongs the time for customs clearance of goods. The slow clearance time, coupled with the rapid increase in the number of trucks at the port in recent years, makes the congestion at the port and in the vicinity of the port increasingly serious. According to USAID, an average of 16,400 trucks arrive at Cat Lai port every day, sometimes, the number of trucks is up to 22,000 at peak hours.
Currently, the waterway entering Cat Lai port can only receive ships with a capacity of 3,000 TEU. While there has been lately a trend towards larger ships with 16,000 TEUs-24,000 TEUs in trade shifting in the Asia region. The Cat Lai port can’t receive ships with 16,000 TEUs-24,000 TEUs, said Mr. Hoang Hong Giang, Deputy Director of the Department of Transport under the Vietnam Maritime Administration.
According to Deputy General Director of Saigon Newport Corporation Nguyen Phuong Nam, in order to improve the operational efficiency of Cat Lai port, Ho Chi Minh City needs to soon adjust the seaport planning in the orientation of increasing the area for exploitation services, ports, logistics outside public ports. Furthermore, the General Department of Vietnam Customs should consider mechanisms permitting transport of import goods from Cat Lai port to nearby gathering yards or inland.  At the same time, the construction progress of Cat Lai Logistics Center should be sped up in the area of 60-100ha, which will be the general warehouse for distribution of goods for the city’s port cluster, connecting to Cai Mep - Thi Vai deep-sea seaport in the Southern Province of Ba Ria - Vung Tau.
In her opinion, Deputy Marketing Director of Cat Lai port Pham Thi Thuy Van said that the anti-congestion measures at Cat Lai port should include speeding up the investment progress in the road infrastructure transport system which connects with the port. Therefore, special priority is given to the completion of these projects such as the My Thuy intersection project phase 2, investment projects on inter-port routes, the project of expanding Nguyen Duy Trinh and Nguyen Thi Dinh streets, the Ring Road 2 through Thu Duc City, helping to reduce traffic pressure on the Hanoi Highway and the National Highway 1 routes, the Ring Road 3 with a length of 91.6km which is the main road connecting the satellite towns of Ho Chi Minh City with the Southern Key Economic Zone, and the Ring Road 4.
Ms. Pham Thi Thuy Van also mentioned that USAID supports Vietnam in establishing an open port area and a free trade zone because this model has been piloted in Cat Lai port, but the work has met with work stoppages while the model is effectively implemented in ports in the world. She also talked about the free trade zone at Cai Mep port and the promotion of the construction of a port community system for the HCMC area or nationwide. Last but not least, according to her, accelerating digital transformation for the port industry in Vietnam, will facilitate logistics development.
However, in order to synchronously improve Vietnam's seaport infrastructure in general and at Cat Lai Port in particular from now to 2030, the USAID-funded Trade Facilitation Project research team estimates that a bug expense of VND313,000 billion is needed. Therefore, according to experts, besides capital from the state budget, it is necessary to have policies to attract investment capital from businesses and other sources in the form of public-private partnerships.