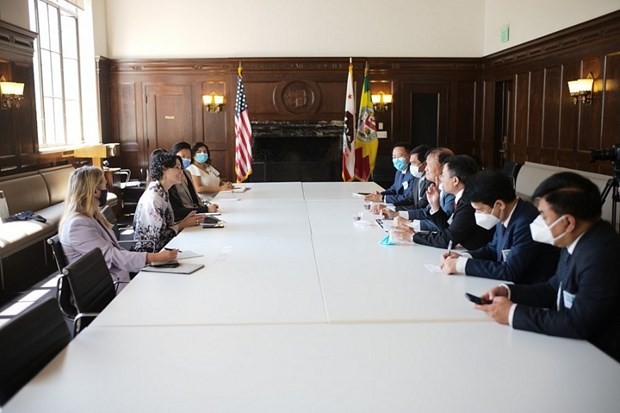 The meeting between Deputy Minister of Industry and Trade Do Thang Hai and Deputy Mayor for International Affairs of Los Angeles Nina Hachigian (Photo: congthuong.vn)

According to the Cong Thuong (Industry & Trade) newspaper, Hai had a working session with the administration of Los Angeles city on July 11 to discuss economic cooperation issues.

He said as a highly open economy with growing engagement in global value chains, Vietnam has its future increasingly connected with the that of the region as well as stability of its relations with major economies, including the US.

Bilateral cooperation has been quickly expanded to many aspects, of which technology, energy, infrastructure and digital economy are assessed as greatly potential and becoming pillars of their economic - trade connections in the future, he went on.

Hai noted to guarantee the achievement of growth targets, energy security and energy transition will be the leading priorities in Vietnam’s socio-economic development. It will be a big challenge as the country has to concurrently boost the scale of power sources and grid, strongly shift from fossil fuel to cleaner fuel for power generation so as to realize the commitments made at COP26, and keep power prices reasonable. 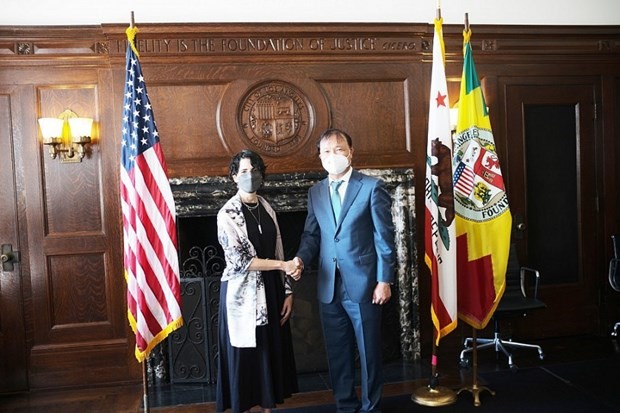 Deputy Minister of Industry and Trade Do Thang Hai (R) and Deputy Mayor for International Affairs of Los Angeles Nina Hachigian (Photo: congthuong.vn)
Deputy Mayor for International Affairs of Los Angeles Nina Hachigian said her city attaches importance to the relations with Vietnam and wishes to further enhance partnerships in renewable energy, advanced manufacturing and hi-tech agriculture. The two sides discussed orientations for promoting collaboration in trade, market opening, retail, energy, energy transition, hi-tech agriculture and digital economy, among others on the basis of mutual interests. They affirmed Vietnam’s cooperation with the US, including Los Angeles, holds much potential and room to develop, and that the business community in California and its Los Angeles city, with capital and technological advantages, will play the central role in the reinforcement of bilateral ties in the time to come. Also on July 11, the Vietnamese Ministry of Industry and Trade, the Los Angeles Mayor’s Office and the city’s Chamber of Commerce held a Vietnam - US business forum with the participation of over 150 companies from both countries. Hai described the forum as a significant event as this was the first time after nearly three years, since the Covid-19 pandemic broke out, a business delegation from Vietnam had come to the US to directly meet local officials and enterprises to step up trade and investment partnerships.
VNA