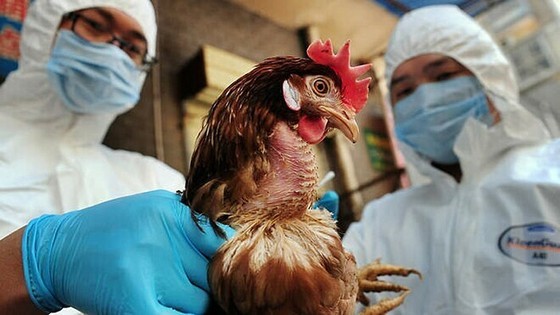 Breeders should vaccinate their waterfowl to prevent the bird flu

The Department of Agriculture and Rural Development of Quang Ngai Province today reported that the avian virus killed over 2,200 ducks in three households and farms in November.

Roughly 600 ducks of breeder Tran Van Hai in Mo Duc District’s Duc Hoa Commune died of the dangerous virus. The farm of breeder Nguyen Bay in Duc Pho town raised 640 waterfowls, 300 of them were dead while 340 were killed to curb the spread of the disease. Breeder Nguyen Van Van in Quang Ngai City had to kill 800 chickens while 200 poultry were dead due to the avian virus. Most ducks are 28-100 days old, weighing from 1.2kg to 2.5kg.

Right after test results showed that waterfowl in the province was positive for influenza A/H5N1 virus, Quang Ngai Sub-Department of Livestock and Veterinary Medicine coordinated with local authorities to immediately implement preventative measures to control the epidemic such as disinfection with Benkocid chemical, lime powder as well as killing 1,340 ducks in the herd.

According to the Quang Ngai Sub-Department of Animal Husbandry and Veterinary Medicine, in the coming time, the risk of the introduction of the bird flu virus on poultry farms is higher because the weather is complicated at the moment; plus, through the results of monitoring samples, 38/168 samples taken in markets in Quang Ngai Province were found to be positive for influenza virus A/H5N1 and 4/168 samples were positive for influenza virus A/H5N6 the avian influenza virus since the beginning of the year.

Facing the development of the influenza A/H5N1 epidemic in Mo Duc District, Quang Ngai City and Duc Pho Town, the province’s Department of Agriculture and Rural Development suggested authorities in districts, towns, cities and localities continue implementing epidemic prevention and control measures according to regulations with a focus on vaccination and disinfection as well as transportation of poultry products in and out of epidemic areas according to the present law, to prevent the epidemic spread.