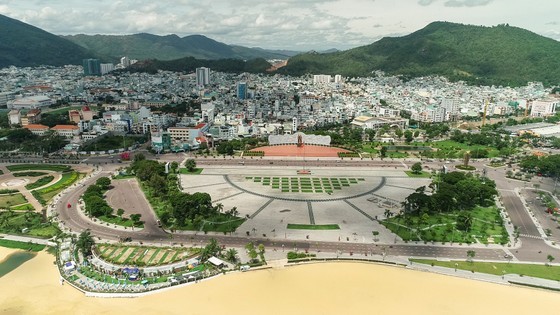 The development of the urban center of Quy Nhon City. (Photo: SGGP)
Accordingly, Binh Dinh approved the investor to implement the above project as a joint venture among Phu Tai Joint Stock Company, Truong Hai Trading Construction Joint Stock Company, and the Northern Service Development Investment Joint Stock Company. Phu Tai Joint Stock Company, established in 2004, and headquartered in Quy Nhon City, is a multi-industry business enterprise. Currently, this enterprise is developing many projects in Quy Nhon City, such as Phu Tai Residence, Hoang Van Thu Apartment Building (Phu Tai Central Life), and Long Van 4 in Quy Nhon City. Truong Hai Trading Construction Joint Stock Company, headquartered in Hanoi, was established in May 2016. Its main business is in architecture and technical consulting. The Northern Service Development Investment Joint Stock Company, headquartered in Hanoi, was established in October 2021, with the main business in the wholesale trading of automobiles and other motor vehicles. Binh Dinh Provincial People's Committee assigned the joint venture of these three companies to carry out the project following the objectives, scale, schedule, and commitments in the investment registration dossier. They must comply with the adjusted project of the zoning planning scale of 1/2000 in Nhon Binh and Nhon Phu wards in Quy Nhon City, approved by the People's Committee of Binh Dinh Province in Decision No.534/QD-UBND dated February 21, 2022 Van Ha Urban Area project has an investment capital of more than VND2.93 trillion, including contributed capital of VND480 billion from investors, accounting for 16.37 percent of the total investment capital, and mobilized capital of more than VND2.45 trillion, accounting for 83.63 percent. With a total area of 49.76ha and a population size of about 14,000 people, Van Ha Urban Area is a new urban area combining urban embellishment with the scale of low-rise housing, mixed high-rise housing, commercial, and services, healthcare, and educational works. The project progress is divided from October 2022 to September 2027. Accordingly, from April 2025 to September 2027, investors will build low-rise, high-rise, and social houses, commercial and service works, and public works to complete the project and then put the project into operation.

Binh Dinh Province's Economic Zone Management Board coordinated with the investor to hold a groundbreaking ceremony for the Hollywood Hills by YOO Inspired by Starck (Hollywood Hills) subdivision of the MerryLand Quy Nhon mega project, on October 2, at Hai Giang Peninsula in Quy Nhon City. At this event, the investor introduced the real estate design and development brand YOO Inspired by Starck to Vietnam for the first time. 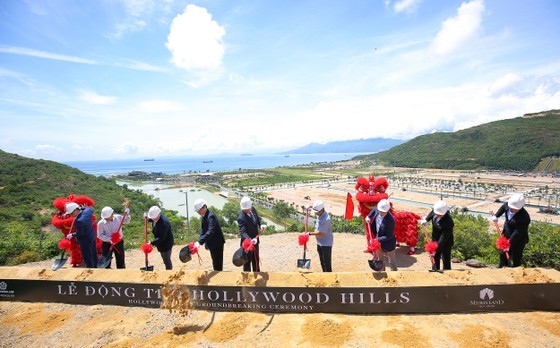 The groundbreaking ceremony of the Hollywood Hills project. (Photo: SGGP)
Hollywood Hills, with a scale of more than 90ha, is one of the high-end subdivisions of the peninsula city - MerryLand Quy Nhon.

The project is made up of three sub-zones, located on the hillside at an altitude of 40-100m, with mixed-use art villas facing the sea and back to the mountain, overlooking Quy Nhon Bay.

According to Mr. Rich Millar, YOO’s vice president in charge of business development in the Asia-Pacific region, the classical and cultural architectural designs of the Hollywood Hills villas are intended to pay homage to the outstanding beauty of Binh Dinh Province.

Mr. Lam Hai Giang, Vice Chairman of the People's Committee of Binh Dinh Province, expects that the Hollywood Hills subdivision, if properly invested and meticulously cared for and with the cooperation of YOO Inspired by Starck, will create a great attraction for discerning customers, promoting the high-end tourism segment. It is a strong step forward in the journey of bringing Quy Nhon City’s tourism to the world.
By Hoang Ha – Translated by Gia Bao

Loc Troi exports over 400,000 tons of rice to European supermarkets

Coffee exhibition to open at Independence Palace in December

Tuesday, January 17, 2023 18:02
The WorldSteel Group has opened its second office building Hai Son Industrial Park (Phase 3+4), as part of the company plan to meet the needs of an expanding global market.

Saturday, January 28, 2023 15:33
The Ministry of Industry and Trade (MoIT), on January 27, said that the petroleum sale in Ho Chi Minh City was stable. Petrol stations normally operated to serve the travel needs of people, and there was no situation of hoarding and overcharging.