My Thuan 2, Rach Mieu 2 Bridges to be started construction soon 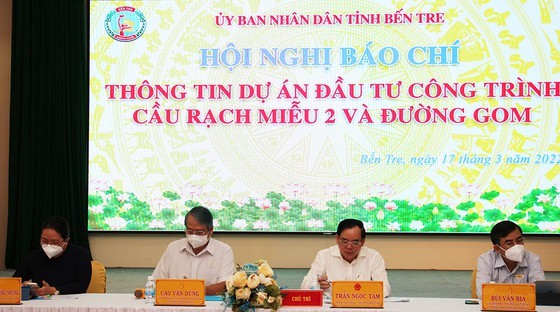 At the press conference

Construction of Rach Mieu 2 Bridge, connecting Tien Giang and Ben Tre provinces, will be implemented between 2021 and 2025, with an investment capital of VND5,175 billion (US$227.21 million) while the path into the bridge is worth VND1,158 billion ($50.77 million) coming from the State Budget.

Chairman of Ben Tre Provincial People's Committee Tran Ngoc Tam said that the Rach Mieu 2 Bridge project step by step perfects the transport network in the region, meeting the increasing transportation demand on the National Highway 60 for economic development and ensuring security and defense in Tien Giang and Ben Tre provinces in particular and the Mekong Delta in general.

The Rach Mieu 2 Bridge project with a total length of about 17.6km, of which the length of the leading bridges is 2km long and 20.5m wide. The bridge over the mainstream of Tien River is designed with a cable-stayed bridge with a main span of 270m long and 17.5m wide. The Rach Mieu 2 bridge has 6 lanes including four lanes for motor vehicles, two lanes for rudimentary vehicles with a design speed of 80km/h.

According to a leader of the People's Committee of Ben Tre province, local administrations have reclaimed 48 hectares of land in two communes of Chau Thanh District and two communes of Ben Tre City for the construction of the Rach Mieu 2 bridge project.

In the face of an overloaded Rach Mieu bridge, Ben Tre province has built a temporary ferry to reduce the traffic congestion but gridlocks have been seen frequently, especially on weekends, holidays and Tet holidays ( the Lunar New Year).