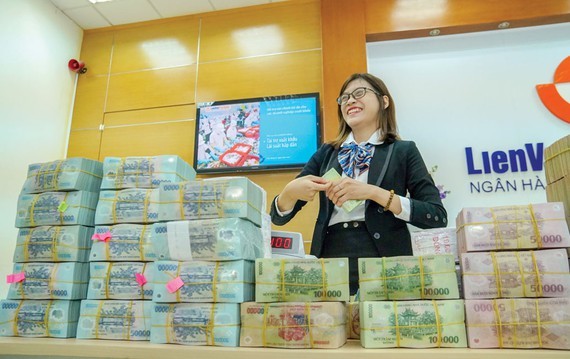 Before the Covid-19 outbreak, credit growth was spread evenly over the months. After the outbreak of the disease and in the last two years, there was a very slow increase in the first months of the year but accelerated very quickly in the last months of the year. This is supported by the fact that many commercial banks had increased their credit limit at the end of the year to support businesses. At the same time, the credit absorption capacity of the economy is still very large. One bank leader said that the bank can increase credit stronger than reported numbers, but because the limit has been reached and if the loan exceeds the limit, they will be fined by the State Bank of Vietnam, so the bank has to stop this process.

In the credit structure, Foreign Direct Investment (FDI) enterprises attract capital strongly in the last months of 2021. FDI enterprises have long been mainly customers of foreign banks, but recently a number of domestic banks have also connected with this group of potential customers. For instance, according to BIDV announcement, outstanding loans of FDI customers in 2021 increased by 21 percent. Another area attracting significant capital is retail, because retail credit has been the main growth driver of banking system credit in the last five years. Specifically, the proportion of retail credit increased from 31 percent in 2015 to 42 percent of total outstanding loans at the end of the third quarter of 2021. Recently, retail and SME credit are also preferred by banks because of the risk coefficient when calculating CAR, which is lower than that of large enterprises. At VietinBank, the proportion of retail and SME loans in 2021 will reach 57 percent, and BIDV recorded a 25 percent increase in retail debt balance in 2021 compared to 2020.

With population growth and rapid economic development, individual consumer debt is a percentage of GDP lower than Malaysia, Thailand, and China. Vietnam is considered to have potential for the retail banking industry, seen as an opportunity for banks, but retail credit in Vietnam also has issues that need attention. The two retail products with large balance currently are home loans and car loans. The need to buy a house to live in is still there, but people need to borrow money to buy a house for investment. Therefore, credit capital can completely flow through this channel indirectly into the real estate market.

According to the Credit Department of Economic Sectors, growth showed decrease from over 26 percent in 2018 to 11.89 percent in 2020, lower than the overall credit growth of the economy. The latest data by the end of November 2021, showed real estate credit only increased by about 12 percent over the previous year. However, in terms of proportion, real estate credit currently accounts for about 18 percent to 20 percent of the total outstanding loans of the economy. With these two points of credit absorption, real estate lending has so far caught the attention of experts.

In retail credit, part of this source is spent on consumption but most of it flows into the stocks channel. According to Vietcombank Securities Joint Stock Company (VCBS), in 2020 and 2021, the growth of the assets market such as real estate and securities contributed to boosting the retail credit of banks. In 2021, the request to reduce interest rates accelerated and banks also actively reduced interest rates in some areas but still maintained their profit because of the steady increase in interest income. According to statistics, the Net Profit Margin (NIM) of banks averaged 3.7 percent, the highest level since 2011.

According to experts, if capital flow continues to wriggle into areas with uncontrollable risks, the economic benefits will not be large. Going in that direction, banks benefited because they still kept high profits in 2021, but the economy only benefited from revenue collection from corporate income tax, and the rest did not see any growth benefits. In 2021, the banks made a big profit in the context that businesses still struggling with many difficulties and the economy only grew by 2.58 percent. In the first two quarters of 2021, credit growth slowed, and the GDP in the first and second quarters increased by 4.72 percent and 6.73 percent, respectively. In the fourth quarter, credit increased by 6.36 percent but GDP only increased by 5.22 percent, and for the whole year, credit increased by 13.53 percent but GDP only increased by 2.58 percent.

In 2022 the State Bank of Vietnam has set a credit growth target of 14 percent, and with this target, directing capital flow into the real economy will be the most important task of the banking system.