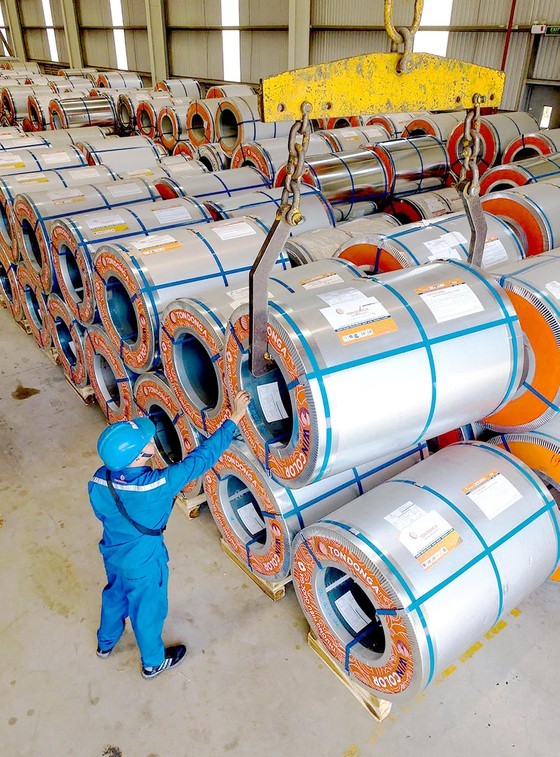 This matter was raised at a conference on trade remedies held by the Central Propaganda Department, in association with the Ministry of Industry and Trade in Ho Chi Minh City on November 19.

Vietnam's export goods are facing more and more trade remedy cases. There were only 25 trade remedy lawsuits in the period 2005-2010, but this number increased to 93 in the period 2017-2021. The US is the main export market of Vietnam and also the place where Vietnamese goods are sued the most with 37 cases, followed by India, Turkey, Canada, Australia, the EU, Philippines, Indonesia, Malaysia, and Thailand.

Following lawsuits, Vietnamese enterprises have encountered several safeguard measures and have been subjected to extremely high anti-dumping duties. For example, the US Department of Commerce imposed a tax rate of up to 456 percent on some anti-corrosion and cold-rolled steel products, or polyester staple fiber products were subject to a tax rate of 22.36 percent. It has significantly weakened the competitiveness of Vietnamese export goods in the host country and even faced the danger of being closed by many other importing markets.

Deputy Minister of Industry and Trade Tran Quoc Khanh pointed out three factors that lead to the risk of Vietnamese goods being imposed trade remedies. First of all, the scale of the import-export market of Vietnam is increasing rapidly. Import-export turnover of Vietnamese goods has increased from US$30 billion in 2001 to $600 billion by the end of 2021. Countries have ranked Vietnam among the top countries with strong export growth.

In addition, importing countries believe that raw materials of Vietnamese enterprises are imported from countries that have been applied trade remedies. And finally, many Vietnamese export products are highly competitive compared to the goods manufactured by the host country, prompting local manufacturers to require the government to initiate investigations and apply trade remedy measures.

According to the Director of the Center for WTO and Economic Integration under the Vietnam Chamber of Commerce and Industry, Ms. Nguyen Thi Thu Trang, currently, the fight against trade remedy lawsuits is fairly favorable. Enterprises and associations have been more proactive in preparing documents and records of the production process instead of waiting until being sued to collect them.

The provision of information to refute the evidence provided by local enterprises has become more proactive and timely. However, the winning rate of about 20 percent of the total lawsuits is still too low. Therefore, there should be close coordination between managers and enterprises to handle this problem effectively in the coming time.

Accordingly, domestic enterprises need to be fully prepared in terms of attitude, knowledge, techniques, and resources to appeal effectively and overcome language, legal, and cultural differences. Especially, it is necessary to exchange information regularly with associations and State management agencies, make a plan to hire lawyers when necessary, and build an advanced and modern management system.

On the other hand, enterprises have also asked authorities to promote the fight to force the importing countries to remove the regulation that classified Vietnam into the special market status - one of the factors that make it difficult for Vietnamese enterprises to win trade remedy lawsuits.

Director of the Trade Remedy Authority under the Ministry of Industry and Trade Le Trieu Dung added that currently, the MoIT had probed into 23 cases of imported goods into Vietnam, and at the same time, increased receiving petitions requesting for trade remedy investigation of domestic enterprises. It is a measure to protect the chain of domestically produced goods.

At the same time, the ministry has been actively supporting enterprises to express their views against unfounded arguments, violating WTO regulations of plaintiffs or foreign investigation agencies.

The ministry has also proactively provided accurate, complete, and timely information based on the request of the investigation agencies to the government and supported businesses in the process of handling the case. In the long term, the ministry builds an early warning system for many industries and products at risk of facing trade remedy lawsuits in many different markets for enterprises to monitor actively, thereby preparing for a timely response.

Vietnam has signed 15 free trade agreements (FTAs). The removal of tariff barriers has been creating a lot of advantages for Vietnamese goods to penetrate and constantly expand in importing countries. However, along with advantages, importing countries will increase trade remedy measures to protect domestic production.