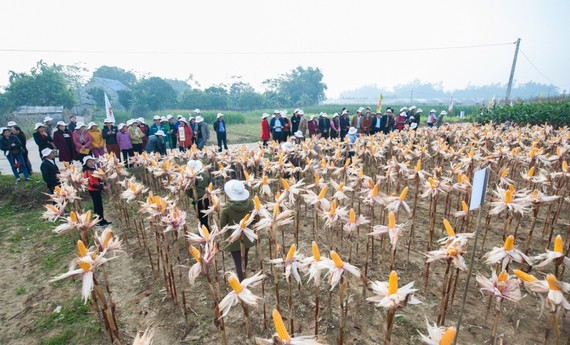 According to Mr. Nguyen Nhu Cuong, Director of the Department of Crop Production, at present, rice farmers make little profit, and even suffer losses sometimes due to the sharp increase in input costs, such as fertilizers and plant protection drugs. According to calculations, fertilizers usually account for about 21-24 percent of the total cost of rice production; pesticides account for about 15-17 percent; seeds account for 9-10 percent. Thus, these items account for at least 45-50 percent of total costs. These input products are mainly imported, so when the global supply fluctuates, there is not only a shortage of output but also a price hike. Especially, when the exchange rate increases, the cost of imported raw materials will climb accordingly.

Currently, Vietnam also has to import a lot of animal feed. Worryingly, the country tends to increase imports of this group of products. Specifically, in 2021, nearly US$10 billion was spent on importing animal feeds, an increase of more than $1 billion compared to 2020. According to statistics from the General Department of Vietnam Customs and the Import-Export Department under the Ministry of Industry and Trade, in the first 11 months of 2022, Vietnam is estimated to import about $8.9 billion of animal and poultry feed and raw materials.

According to the Vietnam Animal Feed Association, animal feed accounts for 70-75 percent of the production cost of livestock products, such as chicken and pork. In November, farmers faced difficulties when the live pork price dropped to VND51,000-VND55,000 per kg from VND63,000-VND70,000 per kg, but animal feed prices in the domestic market remained high because they were mainly imported. From the beginning of 2021 to now, enterprises producing and supplying animal feed have raised their prices for 17 consecutive times without decreasing any times.

The reasons for the increase in domestic prices include the world raw material prices being affected by inflation and increased US dollar exchange rate; besides the conflict between Russia and Ukraine, natural disasters in South America and Europe reducing export output; large investment funds shifting to speculating on agricultural products, while China increasing the purchase of grain for domestic production and husbandry.

Mr. Tong Xuan Chinh, Deputy Director of the Department of Livestock Production, said that at present, Vietnam imports raw materials, such as corn, wheat bran, rice bran, bone meal, fish meal, and soybean meal, from the US, Argentina, Brazil, and the EU. Experts said that animal feed prices in the domestic market would increase in the near future because we could not be self-sufficient in raw materials.

Must be self-sufficient in raw materials

Minister of Agriculture and Rural Development Le Minh Hoan also acknowledged that Vietnam's agriculture is depending on foreign supplies. Vietnam is proud to be an agricultural country. However, not only fertilizers but also corn and soybeans must be imported to make animal feed. Dependency often leads to risks, such as highly-increasing prices and raw material costs, especially in the case of supply disruptions, exchange rate fluctuations, and natural disasters. The solution to this problem, according to Minister Le Minh Hoan, is to find ways to reduce dependence on external supply to the maximum extent. Only raw materials that we cannot produce are imported.

Regarding raw materials for the production of animal feed, Mr. Tong Xuan Chinh said that, in the context of the current increase in animal feed prices, it is necessary to develop corn and soybean material growing areas to be self-sufficient at least 50 percent of domestic raw materials, gradually reducing dependence on imports, by converting a part of the inefficient farming area to growing corn kernels and biomass corn. The Ministry of Agriculture and Rural Development has been developing a draft Government decree allowing support up to 50 percent (but not exceeding VND2 billion for each project) of the total infrastructure costs of the raw material growing area to attract cooperative groups and cooperatives to participate in the development of raw material growing areas.