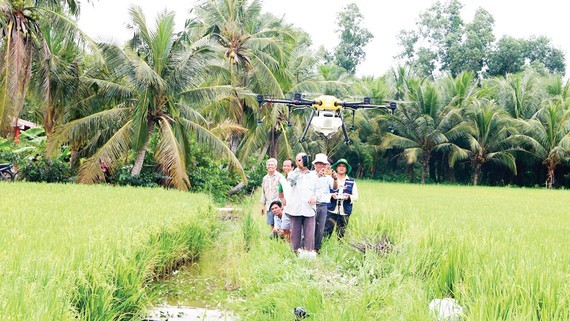 "Pilots" in the fields

Five years ago, Dr. Nguyen Thanh My, Chairman of My Lan Group in Tra Vinh Province, introduced many impressive production models applying high technologies to adapt to climate change. The most prominent was the model of rice production using smart fertilizers. This model was first implemented in Tra Vinh Province, then being adopted by farmers in Dong Thap and Hau Giang provinces. The evaluation from the production of hundreds of hectares of rice shows that the production cost of one kilogram of rice under this model is lower than that of the reference model from VND165-VND224 per kilogram; the rice yield is equal and higher; the profit is higher than that of the reference field by about VND1.9 million-VND2.1 million per hectare. The beauty of this model is that the water management following the applications of agriculture 4.0, such as installing solar-powered water level monitoring systems and automatic irrigation devices, creates convenience.

In Binh Thanh Commune, Phung Hiep District of Hau Giang Province, Mr. Vo Van Trung was the first person to grow melons in a net house. With 3,000 square meters, for nearly five years, by adopting high technology in melon farming, he has had an annual income of over VND500 million. From the efficiency of the melon production model of Mr. Trung, 12 local farmers have participated in the establishment of the Thuan Phat melon cooperative, with a total growing area of 9,000 square meters and an annual income of nearly VND2 billion for four crops per year.

Sufficient investment to create a breakthrough

In fact, many hi-tech agricultural production models have brought efficiency to farmers. However, it raises the question that why these models have not been replicated in the Mekong Delta? Mr. Nguyen Phuong Lam, Director of VCCI Can Tho, commented that digital transformation is an inevitable trend in the modernization of the agricultural sector because technology helps to enhance productivity and value through effective scaling farming and management systems. The Government has shaped the policy for modernization of the agricultural sector, but the implementation process is still asynchronous.

According to Mr. Nguyen Phuong Lam, thinking and synchronization are necessary to digitize effectively. It is difficult when a part of the agricultural sector applies digitalization whereas the others do not. At that time, the agriculture sector could not be synchronously connected. To digitize, farmers must have qualifications and agricultural certificates. For a broader view, first of all, there must be an appropriate and standardized agricultural planning, then synchronous application. Currently, the stage of state management has step by step digitized, located the farming areas, measured and stores data, and monitored developments. However, what they recorded is only in some fields and has not been applied on a large scale. Some enterprises boldly invest in monitoring water quality, seeds, diseases, and traceability but digital transformation still merely focuses on large-scale enterprises. For farming households, the digitalization picture remains vague, or in other words, it is not accessible due to resources and qualifications, said Mr. Lam.

For a long time, smart devices for agriculture have become the "national development strategy" in Japan, the Netherlands, and especially Israel. According to scientists, to achieve such results, investment in agricultural science research must have a stronger breakthrough, especially in the context of climate change, agriculture in the Mekong Delta is one of the most sensitive and vulnerable sectors. Prof.-Dr. Bui Chi Buu, former Director of the Institute of Agricultural Science for Southern Vietnam, said that connecting technology 4.0 with agriculture with a high level of mechanization, synchronization, and the large-scale land area will promote rapidly in quantity in the initial stage, instead of combining with high-tech agriculture because the investment capital is too large compared to the current economic capacity of Vietnam. The specialized farming area must be attached to the agricultural product processing factory. Vietnam can carry out high-tech agriculture and mass agriculture 2.0 and 3.0 at the same time to bring into play the most positive results. After all, the market will be the factor that decides the consumption of agricultural products and meets the goal of enriching farmers.

“We need a synchronous digitalization program. And before digital transformation, the necessary condition is large-scale agricultural production, i.e. large production is required for digitalization to be effective. To do this, enterprises must go first, and the cooperative model must reach a certain scale in terms of area and resources,” Mr. Nguyen Phuong Lam proposed.