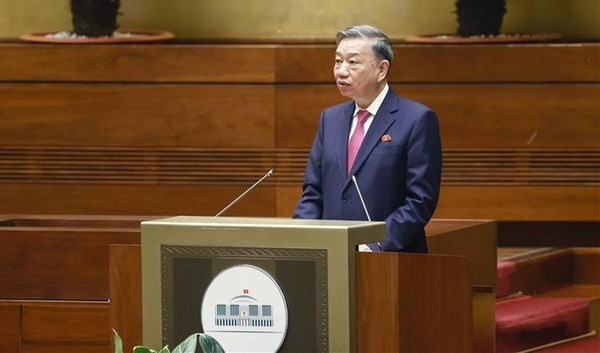 Minister of Public Security To Lam speaks at the session. (Photo: VNA)

Delivering a verification report at the 15th NA’s fourth session in Hanoi on November 7 on the implementation of the Law on Exit and Entry of Vietnamese Citizens related to the birthplace information on passports, Toi said that from July 27, a number of countries in Europe announced to suspend the issuance of visas to the new passport of Vietnam for the reason that it does not contain the "place of birth" information of the holder.

As the issue has affected the entry activities of Vietnamese citizens into the Schengen countries and attracted special public attention, NA Standing Committee included the issue into its August meeting to question the Minister of Public Security.

The Government then directed the Ministry of Public Security and overseas Vietnamese representative agencies to add the "place of birth" information to the passport of Vietnamese citizens and the addition has been temporarily accepted by other countries, but some said that they only accept it until the end of 2022, after which the new passport must have "place of birth" information on its identity page.

Delivering a report on the issue, Minister of Public Security To Lam said that the new passport has been put into use since July 1, 2022.

However, after a number of countries declared that they temporarily suspended the recognition of Vietnam’s new passport due to a lack of birthplace information, the Government proposed that the NA agree to supplement the information on the Vietnamese passport, and include this content to the resolution of the NA’s fourth session, he said.

The head of the NA Defense and Security Committee said that the committee agrees on the necessity to add the birthplace information on the identity page of the new passport.

He said that this will not require additional administrative procedures and cause no additional cost to citizens.

The committee also agrees with the Government’s proposal to add this content to the NA’s fourth session’s resolution, he stressed.

Toi suggested that the Government should seek a long-term solution with the addition of "place of birth" to immigration documents in general to ensure stable and long-term legitimate rights and interests of Vietnamese citizens.