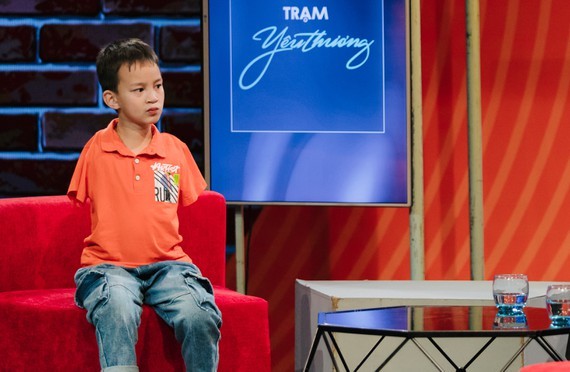 The story of the boy’s long journey to teach himself to write and draw with his foot will be broadcast in the Love Station show at 10 o'clock on June 11 on channel VTV1. Bringing a backpack to the show, Khai introduced each object in turn and quickly and skillfully took it out with his right foot. The eight-year-old boy also easily passed the challenge of using an iPad and painting a picture on a piece of paper using his right foot without any assistance from anyone.

His grandfather, Mr. My, said that the boy’s journey to practice handwriting includes sweat, tears, and great efforts of the boy without hands. Before learning to write with his foot, Khai learned to hold a spoon when he was more than one year old.

At 18 months, the boy with no arms mastered using a spoon to eat without falling any rice out. When he was three years old, Khai was eager to learn to write like other siblings. The family was poor, so Mr. My took a piece of tile that Khai clamped on his leg to practice writing.

Khai said writing letters with the foot is very tiring and painful for his back, but he never stopped trying because that's the way he can go to school to meet friends.

Khai's handwriting is so quite beautiful that MC Minh Hang appraised it.

The greatest joy for Khai and his family is that he was able to study with his peers. At the show, Ms. Tran Thi Thanh Van, Principal of Ninh Xa Primary School where Khai is studying, said the school has made a special desk for Khai to easily write and study.

When asked about his dream, Khai revealed that he wanted to become a dentist. Mr. My said that he only wishes that Khai is always healthy and will be able to do the things he likes. This week's gift from the Loving Station show will partly help Khai's family share the economic burden, giving strength to the two of them to continue the boy’s journey to pursue his dreams.