Specifically, 14 were discovered in Chau Doc City around midnight of March 07 when police stopped and questioned two passenger cars showing signs of illegal activities. The Chinese passengers failed to present entry documents and were promptly detained along with the drivers.

Another 13 were found in Chau Doc City on the afternoon of the same day in a passenger van driven by a Vietnamese man, who told local authorities he was hired to take the Chinese to the Vietnam-Cambodia border. 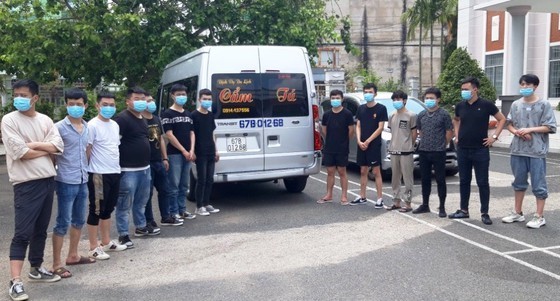 The 13 Chinese nationals detained on March 07

Previously, 7 Chinese found themselves in police custody on March 04 in Chau Doc City, An Giang for suspicion of illegal entry through the border.

The 34 subjects are currently in local quarantine by standard health procedures and awaiting further notice.